Morning view from our terrace

We’ve been seasoned users of Homeexchange.com for many years, exchanging our home in Punta Mita for most of it, and most recently our apartment in Nice. Just like real estate, home exchanging is about location, location, location; the better the location of your property, the better the exchanges you’ll get. Nice has proven so far to be an excellent property for us to exchange. For the summer of 2014 we did a simultaneous exchange for a lovely apartment in Vancouver, Canada, in the chic neighborhood of Yaletown. The building has a stepped roof, so four units are actually penthouse-like units with very large terraces that overlook a park and the inlet of False Creek. We had one of those units and it couldn’t have been a better location. 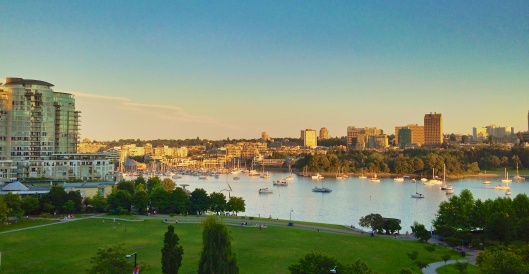 Evening sunset view from our terrace

I went to school in Vancouver for some time so I am quite familiar with the city. As well, I have family here and we’ve spent time in town when passing through up to Whistler for summer or winter vacations. We have done numerous exchanges and recently counted seven different buildings we have stayed in around Vancouver, mostly in Yaletown.

Looking across False Creek back to downtown Vancouver.

Yaletown, or the West End, is wonderful because you can walk or bike easily to all areas of the downtown core. And there is the amazing seawall walk, which wraps around the shoreline of downtown Vancouver. You can drive for miles without crossing any roads or street lights, right in the heart of the city. I don’t think that is possible in any other city. The seawall is a continuous, mostly seaside, path for pedestrians, cyclists, and inline skaters that extends for a total of 22 kilometres. Starting from Coal Harbour, it winds around Stanley Park, along Sunset Beach, around False Creek, past the Burrard Street Bridge, through Vanier Park, and finishes off at Kitsilano BeachPark. The photo below is of one of the most photographed landmarks that can be found along the Stanley Park portion of the seawall. 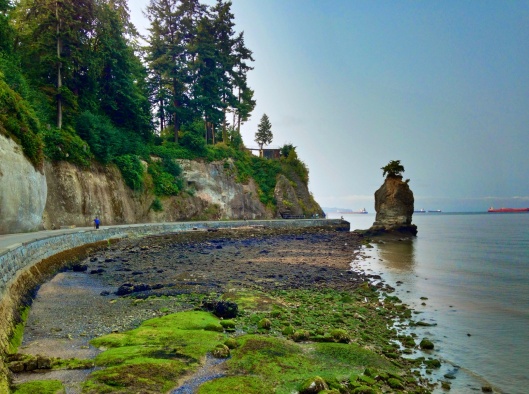 One of the many stylish complexes along the seawall.

And when Vancouver is nice, there really is no place like it. The town just comes alive as Vancouverites are very out-going people. From our terrace we watch people boating, sailing, kayaking, biking and running. The park continually has soccer or volleyball games, or people doing calisthenics or yoga. The landscape is continually moving.

Vancouver is consistently rated as one of the best most “livable” cities in the world, most recently featured in a study by the magazine The Economist, Vancouver rated 3rd behind Melbourne and Vienna. Toronto was 4th, giving Canada two cities in the top five of 140 cities rated.

I brought my inflatable paddle board with me and just had to walk across the street to paddle the inlet. We spent our time by biking the Sea Wall each morning and then doing walks around the city later in the day. Lunches were at home or one of the seaside cafe/bistros. Dinner was with friends at home or at one of the local restaurants. There are amazing restaurants in Vancouver, being a very international city. Wouldn’t know where to being in making recommendations, there are so many.