Franck & Paco, (Les Garçons), friends from Mexico and Paris, have a home in Fontveille, Provence and each year in June they hold a party that extends over three days. We drove down from Nice on Friday and stayed close by with friends at their lovely farm house on the outskirts of the village.

Friday night was a served dinner for 16, Saturday night was a themed (Black & White) party of about 50, and Sunday afternoon was back down to 16, before we headed back to Nice. Most who attended held in common that they spend time in Mexico, actually that’s where most of us met. As June is quite hot in Puerto Vallarta, Provence was a much better choice of venue for the event!

Les Garçons purchased their property a few years ago and completely renovated it. The home is perfectly situated for them on the outskirts of the village, close enough to walk to the village but far enough away to not bother any neighbors with their parties. And the land in front of them is protected, meaning their views of the olive groves and ruins of a castle on a hilltop, will not be ruined. 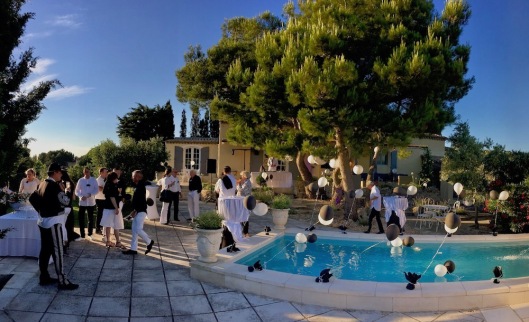 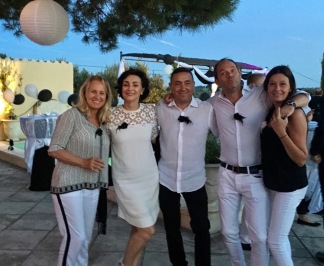 On Saturday we were told we should take in a stone quarry (Carrieres de Lumieres) that is nearby in the commune of Les Baux. I was not given any further information, so I had no idea what to expect, although Florence and another friend I was with, did. We paid for our tickets and then walked through a door into a very large dark room that had colored lights flashing off and on and music from the 60s playing – I thought at first it was a nightclub. Slowly my eyes and my mind started figuring out what was going on around me.

The quarry before the show starts

The room is part of a quarry that is no longer in use. And the way they removed the white/blond limestone in huge blocks, left certain sections as columns to support the high roof, as they continued to cut out the rock. The space it encompasses is massive, and you can walk from one room to the next, taking in a the audio/visual experience portrayed on every wall (including the floor and ceiling) of the quarry. Rather than trying to explain it further, check out the photos below (or the link above), many taken from the same location, to get an idea of what it is all about. I highly recommend it. We took in the “Flower Power” and the “Picasso” shows. 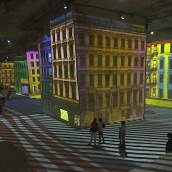 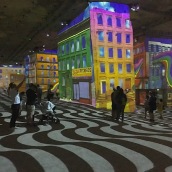 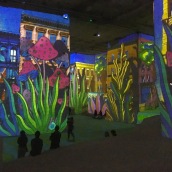 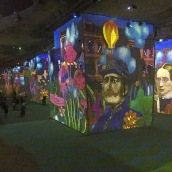 We also visited Arles, with its massive Roman stadium right in the might of the small town. The stadium is so large that in the medieval ages the villages was inside the stadium, and they used the walls of the stadium to protect themselves from outsiders. Unfortunately our stay involved too much entertaining. Next year we’ll stay longer and bring the bikes, as Provence is fantastic for biking.

Montpellier didn’t do much for me. The hotel was stayed at, The Royal, was decent and the location was good. Its a short walk to the train station and the main square of La Comedie. But there being so many wonderful towns in France, I felt this one lacking. I think if one is limited on time, skip Montpellier and move on to other towns, such as Aix-en-Provence and Avignon. It seems to be a town for young people, coming to life especially after 9PM. Been there, done that, moved on. But we did enjoy the small squares of plazas squeezed in amongst a few buildings, usually with shade from large trees; they are scattered throughout historic Montpellier. A nice shopping walk is ??? with its marbled walkways and high-end boutiques.

However if you are going to go, the Royal Hotel is a great place to stay, especially if you are arriving by train as it is so close to the station. Its also very close to the main plaza Comedia and all of historic Montpellier.

On the way up to Avignon we stopped in to Tavel, having heard so much about its rosé. Not much to the town, except the Caveau San Vicente which has samples from 27 local wineries, and a cooperative store at the beginning of town where you can sample its wines. Personally, we prefer the lighter rosés of Provence. We purchased a few bottles, but felt they were too close to reds, and if we want a red, we’ll drink a red. So unless you are a really big fan of Tavel wines, not really worth the stop.

Plaza in front of the Palais des Papes

View of Avignon Cathedral from the Palais des Papes

Plaza in front of the Hotel de Ville, lined with restaurants and cafes

END_OF_DOCUMENT_TOKEN_TO_BE_REPLACED

Going to a market in Provence is a must as there is just so much to see and Provence has so much to offer with herbs, flowers, fruit, vegetable and handicrafts. We went to the market in L’Isle-sur-la-Sorgue on Sunday and it was packed with both people and stands. L’Isle is also an amazing town for antiques, not just on Sundays at the market but all year round with many, many antique stores. I’m sure much of what ends up decorating the newly purchased homes of expats comes from here. If you go, make sure you also visit Fountaine-de-Vaucluse, which is at the base of the mountain where the Surge river begins. Very cute town with the river running through it, and a great place to have lunch, especially if its hot out. Route de Fountaine, which takes you from Sorgue to Fountaine, is a beautiful drive, lined with tall, shading Sycamore trees. 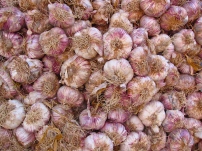 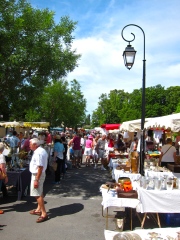 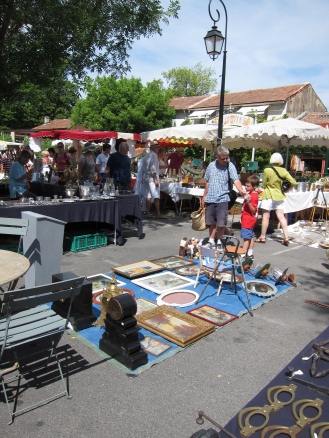 Here’s a list of the some of the markets and the days on which they happen:

I very much enjoy searching for great places to stay when we have decided where we want to go for our next trip. There are just so many wonderful places to stay, to experience. So when looking for a place in Provence, in Vaucluse, when I saw the name of this place–Auberge du Vin–well, I was more than intrigued. The Auberge is operated by Linda and Chris, a couple who not only operate a wonderful Auberge, but also are certified wine instructors. All we were looking for was a nice place to stay. Well, we got that and a great mini course on wines in the Vaucluse region.

The Auberge is nestled in the middle of three wines vineyards (grenache, syrah and viognier), in between Carpentras and Mazan, making it strategically located for visiting all parts of the Haute Provence and the Rhone region. Nice accommodations, wonderful pool and garden area, and very hospitable owners.

We’ve taken numerous courses and tastings before, but this was the best yet. Linda knows her stuff, and she doesn’t have to go far to provide product for her course on Rhone wines. After talking a bit about the history of wine in the region, the types of grapes available, and the concept of the appellations, we then stepped right outside the Auberge and see firsthand syrah, vionier and grenache growing on the vines.

Our course involved eight tastings of wines; two Viognier whites (the “new” Chardonnay), two cru reds from Beaumes de Venise, two desert wines (a red and a white) and a Chateau Neuf de Pape with a surprise bottle of 2001 Domaine la Tourade that was simply amazing.

A few interesting things were learned were:

If you are looking for a wonderful place to vacation (Provence) and also learn a little more than about French history, The Auberge du Vin may be the place you may want to consider for your next stay.

Provence consists of three departements: Bouches-du-Rhone, Alpes-de-Haute-Provence and thirdly Vaucluse, which is the region we were about to visit and tour. Within Vaucluse there are also three sub-regions, called Luberon, Mont Ventoux and Avignon and we did our best to get in a little bit of all three.

We left Avignon and headed south to Cavaillon, passing through, taking highway D2 towards Menerbes. This was beginning of our tour through small Provencal villages until we made our way to our stay at Auberge du Vin just outside of Carpentras. Wonderful countryside, a lovely drive and numerous hilltop villages to stop at and walk through, such as Menerbes, La Coste, Bonnieux, Gordes and Venasque. All cute and quaint, but Gordes stands out and is really quite something to see from the viewpoint when you arrive from the south on D2. And you will immediately know you are getting close to Gordes because of the unique walls or fences along the highway made solely of rock, flat, shale-like rock, starting with them placed horizontally up to about three meters, and then a top row placed vertically. Very unique. 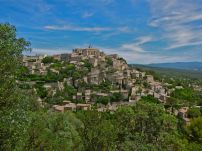 La Costa looking back from Menerbes 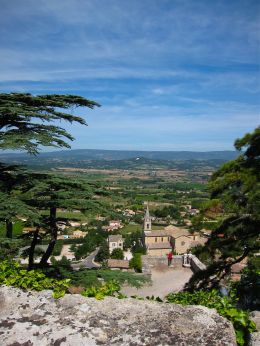 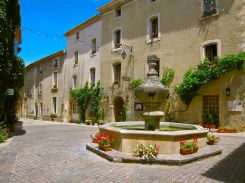