After a couple of weeks in the Algarve, primarily the Carvoeiro region, we drove east to Seville, Spain, about two hours away. The old town of Seville is quite something, like a maze that at first can be quite intimidating as the streets are so narrow and windy that it is difficult to know where you are or if you are going in the direction you want to be. I highly recommend using GPS at first, as a map doesn’t help much as not all the streets are labelled. And, they seem to change their name every few hundred yards!

But it didn’t take us long to get the feel of the town and the parts we liked best. It is a great city, at least for the old-town aspects of it. Outside of the old city walls though, there’s nothing that got us too excited. We bought tickets for the hop-on, hop-off bus and did the tour, but it really wasn’t that interesting. What’s worth seeing of Seville is in the old-town district, the cathedral, castle, gardens and especially roaming the streets of the Santa Cruz quarter.

Here, the streets become very narrow and all you have are walls and doors on each side, with the walls nearly touching at times. But behind these walls, which we can see firsthand when the doors are open, are large courtyards that allow plenty of natural light into the surrounding rooms. A few of the larger homes have been turned into boutique hotels, and they are also open to view their unique courtyard designs and features.

We spent our days walking the streets of Seville, and at night enjoyed drinking Rioja and eating tapas at the numerous tapas bars. At one bar, after ordering our drinks and food, he asked if we were Mexican. We laughed and replied yes, and he said he could tell from our accents!

On the second night we took in a flamingo show at Casa de la Memoria. It was spectacular, with just two dancers,  singer and guitar player, but what a show. Highly recommend it and would go back for more.

Right next to Casa de la Memoria on Calle Cuna is the Lebrija Palace; the former home of the Count and Countess of Lebrija. The countess spent years decorating and renovating the home, bringing in old talavera tile murals for the walls and multi-colored marble and stone mosaics on the floors. She had a passion for archaeology so there are many artifacts and antiquities displayed as well in the home. Worth taking in as well.

Line for the Alcazar Castle – get there early!

There were a lot of people in town as it is the Seville April Feria, so we’ve stayed away from the line-ups to get into the church and castle; we’ll have to make a return trip for that. But just walking the streets is an experience worthy of a return visit for us. 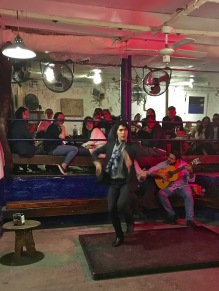 But on our last night we really had a treat when we met up with our Parisian friends, Rejane and Henri, who happened to be in town, and we went to La Carboneria. This is a bar/warehouse which hosts great flamingo each night. No cost to get in, drinks are cheap, but in order to have a good seat you have to arrive early. First show starts at 9:30 and two more follow. We stayed for all three, leaving sometime after 1PM. The dancer, who looked a lot like Prince, was just amazing with what he could do on the dance floor. 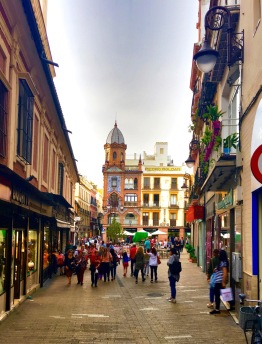 In the Algarve, our favorite area is around Carvoeiro, a bench of high land between the towns of Albufeira and Portomao, which offers rolling hills on a an elevated coastline, and an amazing oceanfront with spectacular cliffs, grottos, caves and picturesque beaches. In between the town of Carvoeiro and the beach of Marinha, there is a coastal path one could never tire from walking. We did it in stages, so that we could walk back to our car each time. The walk is posted as medium-difficult, stretches just under 12 km and to walk it all at once would take about six hours.

The first stage of our walk was from Marinha to the small town of Benagil. Just before Benagil is one of the larger caves along this coastline, with an opening on the coast, something like a cenote, where you can look down into and see people on the beach and boats coming and going. The walk takes about 40 minutes each way.

One of the large opening to the water caves below

END_OF_DOCUMENT_TOKEN_TO_BE_REPLACED

After a couple of visits to the Algarve this past fall, we began looking at real estate opportunities as we are considering a full-time move to Europe and the Algarve really has a lot to offer, at least for our lifestyle. It did not take us long to find a few properties we liked, two that were in the same development near Carvoeiro.

We soon discovered that many of the titles for the homes (not so much the condominiums) in this region are not held by individuals but by an off-shore company. Looking into further it seems this is the way things have been done here for quite a long time, and for some good reasons.

END_OF_DOCUMENT_TOKEN_TO_BE_REPLACED

After an amazing winter season in Mexico, (one of the best weather seasons we can remember), we are back in the south of France and quickly acquainting ourselves with the venues and activities we most enjoy here.

For me it means getting back into biking, with trips to places like La Turbie, Roquebrune (which I’ve previously written about so won’t mention anymore about them), the Monte Carlo golf club up and above Monaco, and a new trip to La Revere.

Ride up to Eze on the “Moyenne Corniche” overlooking Villefranche

Eze to the lower left, Cap Ferat peninsula behind it, Villefranche (with cruise ship anchored) to the right and the Nice Airport upper right.

We also arrived back to discover there is still snow on the hills behind Nice, and that there would be a fresh dump of now on a Sunday and into the night. So we drove up Sunday afternoon to Auron, had a wonderful dinner at El White restaurant, stayed the night at the Hôtel l’Ecureuil, and got up early the next morning to blue skies, six inches of fresh powder snow, and hardly anyone on the hill. As we waited for the lift to open, the only other people we saw were those that worked on the hill. We managed to do a few runs before we even saw any other skiers, and certainly never had to wait in line at the lifts. It was a great day. We skied for a few hours, had a coffee break at our favorite restaurant on the hill, Sauma Longue, and then returned a few hours later for lunch.

That evening we went out for dinner in the village to the restaurant El White. We all had steak frites, washed down with a lovely Provence wine from Chateau Roubine. Highly recommended. Food is fantastic, as is the decor… we’ll be back…

We drove back on late Monday afternoon, quite exhausted, had a good night’s sleep and then got up and drove to Ventimigila in Italy for some shopping and lunch. We stocked up on aged balsamic vinegar, olive oil, limoncello, and plenty of fruits and vegetables. For lunch we left Ventimiglia and visited our favorite place in the area, L’Osteria di Caterina located in the main plaza of the old town of Dolceaqua. Great food at great prices.

Village of Dolceaqua with the castle in behind