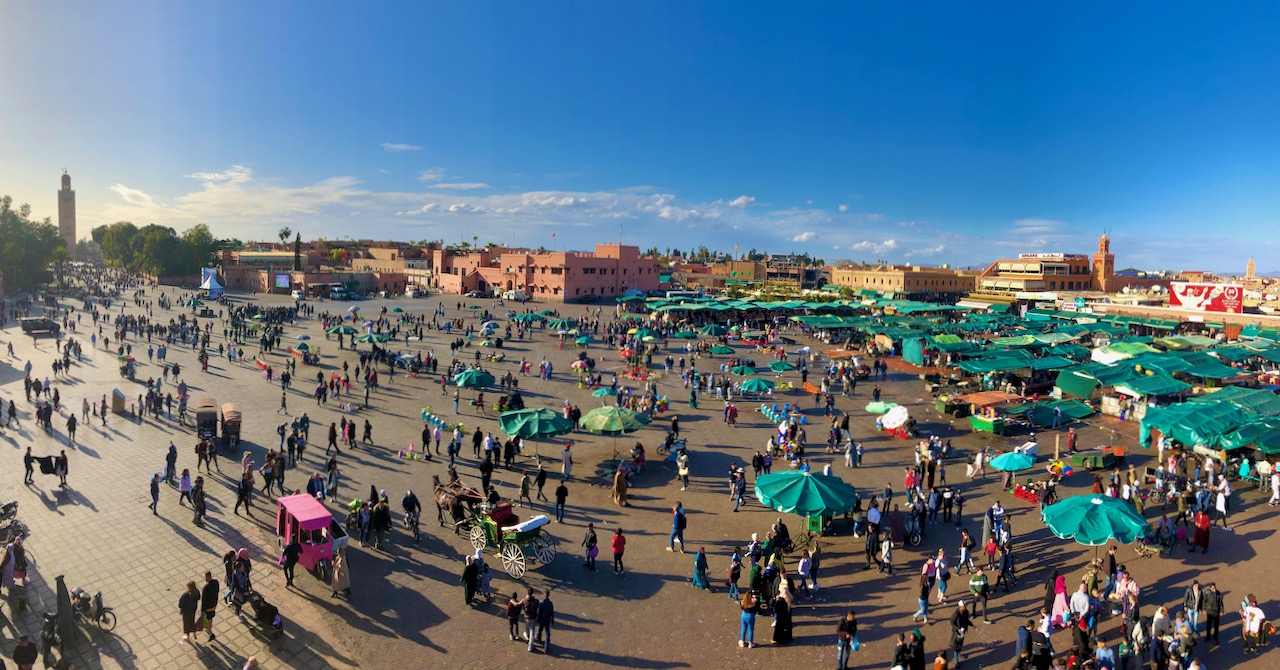 After a rather wet fall and cold winter in Lisbon we decided to head south in search of sun. We opted for Marrakesh, to enjoy the hamans and spas, as well as, of course, explore the city itself.  My earliest memories of Marrakesh come from the song Marrakesh Express by Crosby Stills & Nash. I listened to that album over and over again as a teenager, charmed by lyrics and the excitement of taking a train from Casablanca to Marrakesh.

As we were landing we could see the old rampart walls of Marrakesh. Most buildings are only 3-4 stories, and nothing above that except for the many minarets that rise throughout the city for the calls to prayer. In Marrakesh, everything is painted in a reddish-brown color, so much so that the color balance of your camera is thrown off. The only other dominant colors are the blue of the sky and the white of the Atlas mountains to the south, draped in snow.
We stayed at the Hotel Les Jardins des Koutoubia, located just a few minutes from the main plaza of Jamaa El Fna, the main attraction in the area, and quite close to the airport. The hotel is older but nice, well kept, with amazing wood ceilings, and thousands of framed historical photos of Marrakesh throughout. There are three pools, one large one inside the spa, which offers numerous types of haman, scrubs and massages.

The market area is quite large, especially when considering how narrow the streets are leading into it. It seems to always be full of people, although it certainly intensifies in the evenings. And there is always something going on, with people selling the most simplistic things (tissue paper) to intricate handicrafts of all ages – young boys barely four or five, to elderly men who can barely sit or stand.  In the center are numerous stands with vendors selling freshly squeezed juices and along the perimeter a multitude of restaurants and cafes.

But commerce takes place anywhere there is space. There are no rules nor regulations, everyone seems free to sell whatever they want, as long as it’s legal. Anywhere there is room to lay down a blanket or piece of plastic, a corner or right on the sidewalk, there will be someone trying to sell something. There are so many vendors selling figs, dates, and walnuts you wonder how there can be enough demand for any of them to make a living from it.

Numerous streets lead out from the main plaza, taking one deep within Medina, the old city. Streets are very narrow, not wide enough for vehicles, so people walk, ride motorcycles, bikes, or pull carts behind them loaded with merchandise to sell. Accidents must be frequent as motorcycles travel quite quickly, so you have to stay to the right and close to the walls. And everyone seems to be in a hurry to get somewhere.

These streets take you to covered souks for even most shopping, to mosques, more minarets and museums. Walking them, experiencing them, I can’t help but think that things have not changed here for a very long time. The way things are done today are similar to how they were done hundreds of years ago.
On our walks we continually had young men come up to us and very politely (usually) give directions or offer to help us out when we really don’t need it, and it was nearly always a ploy to direct us to their shop, or a family member’s shop.
Prior to our trip I hadn’t been feeling well so this trip was rather different than our usual ones where I’m up early exploring the area, looking for good photo opportunities. This time we spent a good amount of time at the pools and spa of the hotel, regenerating ourselves.
There probably are numerous attractions that are worth taking in in Marrakesh, but nothing got us too excited. We found the number of people, so many trying to sell you something, and the blandness of the landscape and city scape rather unappealing. It was a bit of a let down after the visions I’d carried for all those years from CSN’s song!
Perhaps if I’d been feeling better, but I think after some 25 years of living in a third world country we are ready for more 1st world discoveries. There’s only so much time we have, it’s impossible to see the whole world, so we’ll most likely be concentrating on Europe, which not only close by, but very rich in history, we speak the languages, and we love the cultures.

One Reply to “A visit to Marrakesh”