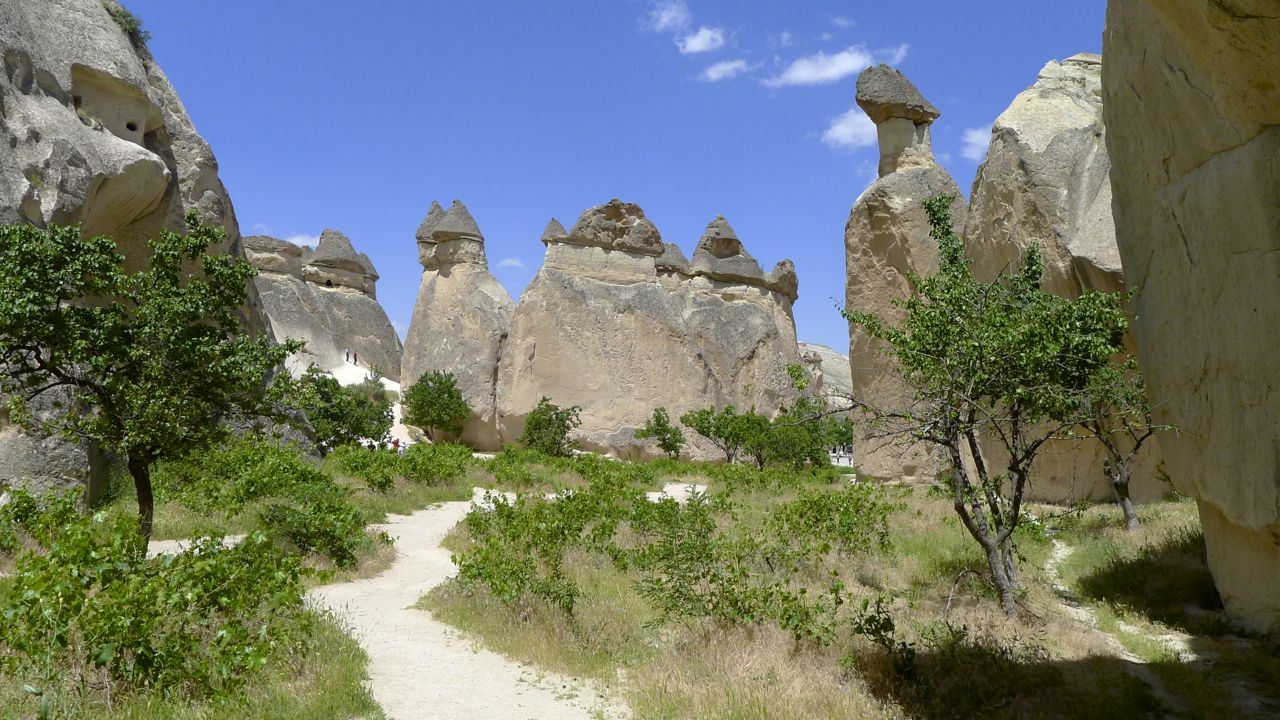 Cappadocia is a place that should be on everyone’s bucket list for places to visit before we actually “kick the bucket”. We visited at the beginning of June in 2013 for a couple of days, before heading out on  a sailing trip through Bodrum, staying in the town of Urgup at the boutique hotel Meleklerevi. A nice place with great hosts (Arzu & Muammer) who gave us plenty of great ideas of what to do and see while in Cappadocia. Muammer has a map  he can supply you with for all the places you should try to fit in while in Cappadocia. We were there for three days, which seems to be just about the right amount of time to get to know the area without rushing.

Cappadocia is famous for its interesting rock formations that just up vertically form the ground. They come in various sizes and styles, seemingly dependent upon which valley you happen to be in. In Goreme they are quite large, tend to be conical and are often referred to as Fairy Chimneys. In Urgup they are narrower and many have seem to have a large rock placed on top of them. In the Pasabag Valley they look rather phallic-like while in the Devrent Valley they can look like things such as animals, with a little imagination. The larger one’s have been carved into to creates homes for people, and many of these are hotels today. The people of Cappadocia also burrowed into the rock cliffs of the valley to create homes and many churches during the time when the area  was primarily Christian. And then when the Christians were being persecuted, they built homes underground. Large cities that could hold thousands of people at months at a time.

For our first day we took an organized tour with the Red Valley Travel Agency, called the “Red Route Tour”. I highly recommend it as it takes you to many of the places you really want to see, with a good amount of time to see the place and take pictures. The tour starts at 10AM and doesn’t finish until 6PM, and there’s a good lunch included as well for about $50 USD. It ends with a visit to a carpet shop, which actually may be the whole reason why the tour is so well priced. It’s all about delivering you to the carpet shop, something like a timeshare presentation! But still, it is worth it. A great tour and even the carpet shop part was very interesting, watching women make the carpets and learn about how it is all done. Well worth it actually.

On another day we rented a car and drove south to visit the Iharta Valley. There is a tour that goes there, but we wanted to take our time, have lunch where we wanted, and this worked out better. We took back roads to get there, enjoyed the landscape, and had a wonderful lunch at a restaurant in Belisirma that had lounges areas made out of wood over the stream that flows through the Iharta Valley. The stream creates a wind stream bringing a cooling breeze, which in hotter days is much welcome. Food was excellent.

Click on any photo below to see larger images and a slide show.