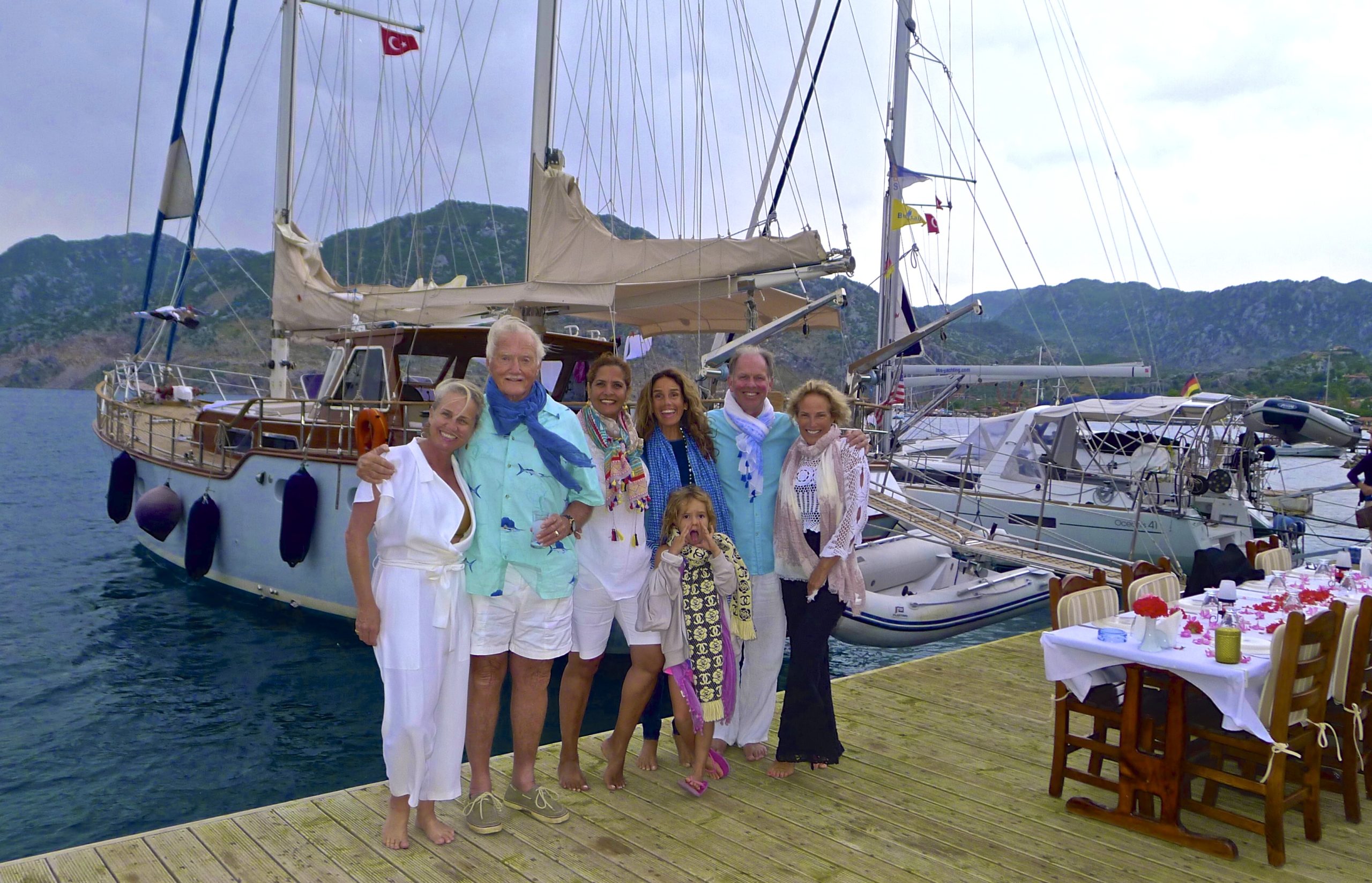 In the Spring of 2014 we returned to Turkey and Greece to once again join up with Jack & Yvonne on their 75′ gullet Teodora, this time with Jack’s daughters Kimi and Karen joining us, along with his granddaughter Malaika. The timing was similar to our trip last year, two weeks in length and starting from the same place in Bodrum, but a few new places were added to explore in both Greece and Turkey. Teodora’s hull had been recently painted, the wood varnished and new white cushion covers added so she looked really good sitting at the dock in Bodrum. We flew in from Nice to Istanbul but our flight was late landing and getting to the gate, and then the immigration line-ups were very long so we ended up missing our connecting flight. Fortunately they had another one latter that day and we finally arrived at the boat around 11PM.

Day one and two were spent gathering provisions and of course a little shopping, which Bodrum is known for.  Our first port of call was Kos, to sign into Greece only (not much to see in Kos), and then we headed to the volcanic island of Nisiros, spending our first night there. We docked in a small marina in the town of Mandraki, (Pali’s port is too shallow), and spent the day exploring the town. The next day we rented a car and scooter and drove up to and down into a volcano that is in the center of the island. Actually, the whole island is just one big volcano. Some of us walked down into the crater and on the way you could really smell the sulphur. Once down, in the center were puddles of boiling water and you could hear more water boiling underneath the ground. Steam was continually rising in different places as it escaped to the surface. From there we drove to the small village of Nikia, built up on the hillside overlooking the ocean and the volcano. Nikia is perched high on a mountain ledge and is a very picturesque, typical, quaint Greek village with great views looking back towards Kos. And there are even better views from the monastery just above the town. This is a great island to explore by scooter and many do.

The next morning we headed for island of Symi, one of our favorites. We spent the night in a beautiful cove just west of the town of Symi, with steep cliffs and very clear waters that were turquoise near shore and then turned into a deep bluish-purple, something we had never seen before. We took out the paddle boards and paddled around and explored the beach. Next morning we got up for more boarding and swimming, and then headed to the town of Symi. We moored in front of the restaurant Pantelis, on the northeast corner of the inlet. This is a busy port with cruise ships, ferries and boats of all sizes continually coming in and out of the harbor. The two shores of the inlet have boats tied Med style but it is so narrow that anchor lines are frequently tangled up. When a good wind is blowing through, which is frequently, this makes it extra difficult to dock and even easier for anchor lines to cross. There are also ferries and cruises frequently coming in and out of the narrow port, which adds to the excitement. And as a day’s sailing comes to an end, boats scramble for the last available spaces available, creating more panic and confusion. Very exciting and fun to watch from the bow of Teodora. Symi is a lovely town, well protected both as a port and with regards to the architecture styles of the homes and commercial buildings. They obviously have stricter rules regarding colors and building regulations. That evening Pantelis had a dance show of traditional Greek dancing was put on followed by a jazz trio right behind our boat so we had front row seats! We ordered at the restaurant and had them deliver on board. Que servicio!

After a few days in Symi it was time to check back into Turkey. We went to Datca as Bozburun’s immigration office had been closed for a few weeks. We signed in, loaded up on water and food and then headed for Similiye. We tried sailing but once the sails were set the wind died and it stayed that way for the remainder of the trip. Similiye is inside a very protected cove and strikes one more of being a lake than a protected harbor. It is completely surrounded by mountains and there is very little tide so homes are built very close to the shoreline with docks and terraces built out over the water. It actually reminds me of the lakes back home in central British Columbia.

We arrived, had a swim and then went boarding around the cove. The water was like glass, but not for long. We had stern tied at a dock of a small hotel/restaurant, who were nice enough to set up a table on the dock for us behind our boat, to celebrate one of our birthdays. Just as we were getting ready to set down for dinner the wind came up and it started raining, hard. We ran back onto the boat and they quickly moved the tables inside onto a covered terrace where we had a wonderful dinner of mezzes, fish and meat dishes. It rained and blew all night, so much that around midnight we had to leave the dock and remain anchored in the harbor. The next day the boat was covered with a fine orange/yellow powder, carried from the desert with the rains, so there was a lot of cleaning up the next day.

After Selimiye we moved to another well protected cove nearby called Orhaniye, which is about as Far East as you can get inside of the Hisaronu Korfezi inlet. In the evening and early the next morning the water was flat, perfect for boarding. A lot of charter boat bases here and plenty were returning to base as it was a Friday. A fisherman came by and we bought some shrimp for dinner.

After Orhaniye we left for Bozburun, arriving in time to have a great dinner at the Bozburun Restaurant, which hosts a picture of Bill Gates as he ate he twice a few years ago while boating in the area. We had mezzes for starters with a nice white wine, and then two fish, a grouper and a sea bass, to share. The next morning we walked the town, did some boarding and swimming and had lunch on board. Karen had met someone on her walk who recommended we try out the Bozburun Yacht Club just outside of Bozburun. So we pulled anchor and headed over to the club, which is a small 20-room boutique hotel which had plenty of dock space and room for us. They have lounge chairs around the docks with towels and bar service, a lovely restaurant and seating area inside. It was previously the summer home of a family from Turkey, who decided to convert it into a hotel when the father passed away. Today it is operated by his wife and son and has become quite popular with people who want to get away from it all and have some privacy. So the likes of Clooney and Costner have been here; the paparazzi would have difficulty doing their work here.

Wind came up at dusk so we pulled out from the dock and remained anchored just in front of the hotel. In the morning we moved back to the dock and stayed the night again, having dinner at their restaurant. The coastline next to them is lined with boutique hotels with lounge chairs on the docks (no beaches) and little floating wooden islands with lounge cushions out in the water, with ladders to climb up upon.

It was now getting to be time to start heading back to Bodrum so we headed out the next day for Datca. Unfortunately winds were beginning to come up so we just stopped briefly in Datca and then headed to Bodrum. Couldn’t moor in the harbor as the president of Turkey was in town, so we anchored in the next cove over. Winds really blew and the anchor gave out in the middle of the night so we had to reset it in gale force winds. In the morning there were two boats grounded that had to be towed out and many had had to re-anchor. Flo, Karen and Kimmie went into town for the day and we joined them later on for dinner.

And that was our trip. We finished off with a few days in Bodrum and our last night at a wonderful boutique hotel, the Manastir, which was situated high up on the hillside overlooking Bodrum and its four bays. Very reasonably priced, two pools, very good restaurant, nice lounge area and great views. May be a bit of a pain for people there for a period of time as you have to take a taxi, or have a car, to get to and from the hotel. But it was perfect for us after two weeks at sea. From Turkey it was back to Nice, our base in Europe, to rest and prepare for our next sail back in Croatia.

Click on any photo below to see a slide show with captions.

One Reply to “Sailing in Turkey & Greece, Spring/Summer 2014”