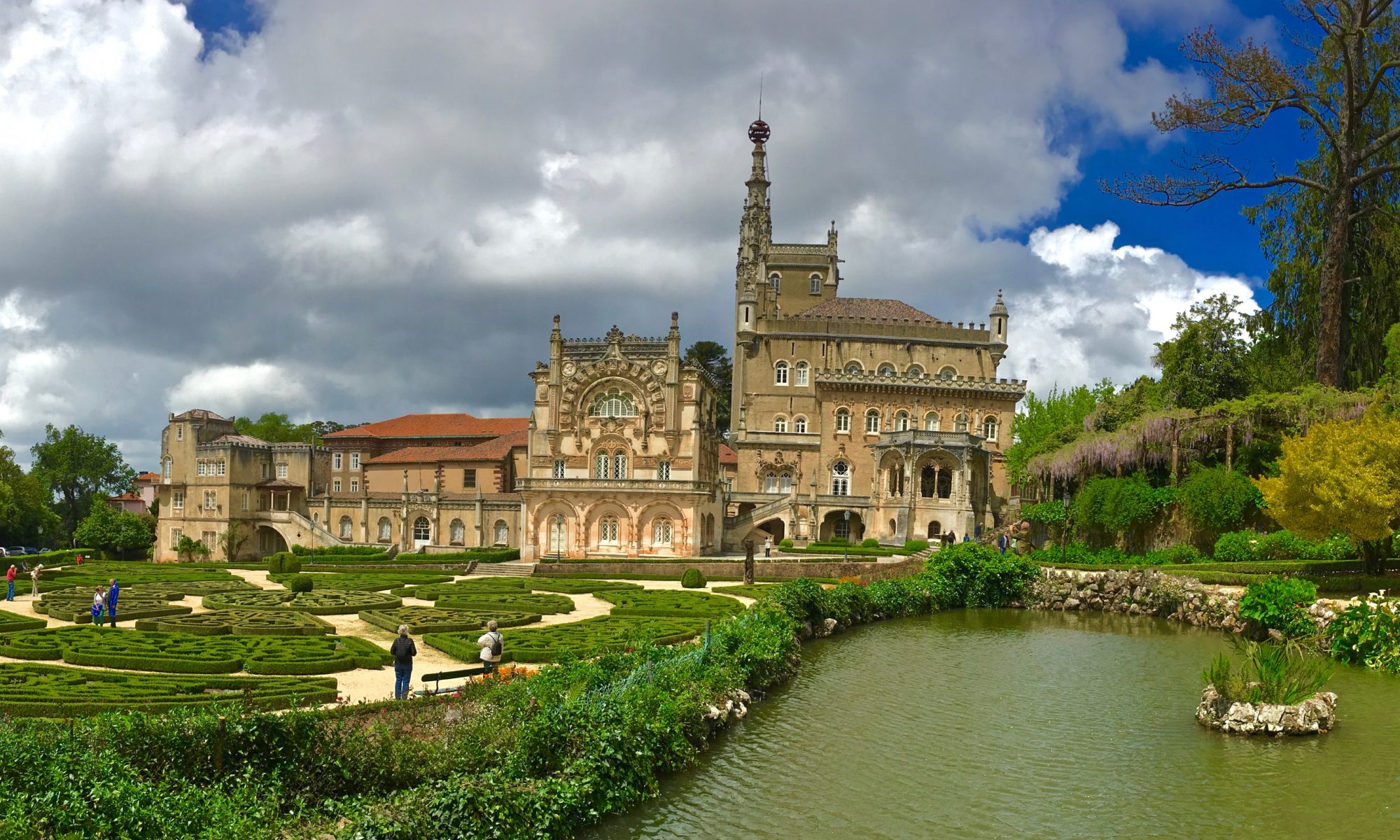 The Bussaco Palace Hotel (Palace Hotel do Buçaco) was built between 1888 and 1907, originally as a palace for King Charles I of Portugal as a royal retreat, or “hunting lodge,” as he referred to it as.  And it embodies a beautiful architectural style referred to as “castle romanticism,” which is obvious quickly upon your arrival to the hotel, and from the photos above and below.

The inner walls are richly decorated with Neo-Manueline portals and stucco work that imitatesManueline rib vaulting, it’s an important showcase of Portuguese painting and sculpture of the early 20th century.

Both the inner and exterior walls are also decorated with  azulejo tile panels, each telling a story taken from Portuguese literature and historical events like the Battle of Bussaco. For about 25 years the construction site was the principal employer of the region and of all major Portuguese artists of the period.

In the late 19th century there were plans to turn the ancient convent into a royal residence for Queen Maria Pia, wife of King Luís I who inherited the palace. But political circumstances led to the palace becoming a hotel instead. The circumstances were that things weren’t going well for the royal family, and she soon had to flee with her family at the turn of the 20th century, by way of the royal yacht. That was the end of a dynasty in Portugal.

The area around the Buçaco Palace was part of a convent established in 1628. The monks not only built a convent (which can still be visited on the grounds) but also created a luxurious garden with many species of trees, still to be enjoyed today. Surrounding the convent and the palace are many acres of old forest with trails meandering throughout it. One can climb to the top of the mountain hillside and enjoy, on a clear day, views as far as the Atlantic coastline and back towards Coimbra. On the day we went it was very cloudy and foggy and we could only see about 100 feet in front of us! Throughout the property there are religious shrines and old homes constructed completely out of rock.

Upon arrival we showered and cleaned up and then headed down to the bar/lounge for a glass of the hotel’s house white wine. The wine list has house bottles going back as far 1945 at $1,100 a bottle. We chose instead the 2013, was a lovely white, full-bodied with hints of cinnamon and peach. We then moved into the amazing dining room where I had the beef and Flo the lamb, along with a bottle of the house red (very nice). Not bad, but pricey. They do really mark up for food and wine. Planalto, which we buy for 6 euros a bottle, they had listed at 28 euros.

It really is like staying at a museum. During the day there are actually people coming through regularly, sightseers, which is fine as that’s usually when one is out sightseeing. In the late afternoon they are gone and you have the place back to yourself. Definitely do recommend it.

On TripAdvisor I saw a number of comments that gave low grades because of the condition of the rooms and upper hallways. They aren’t the best, but, if they were you’d be paying a lot more for a room that what we did. Our rate was $140 euros. If this was run and operated by a luxury hotel chain (and therefore in great condition), the rates would probably be triple. It is a good place to stay and then journey in to visit Coimbra, (shown below), which was where the main palace of the King of Portugal was and today is a university.