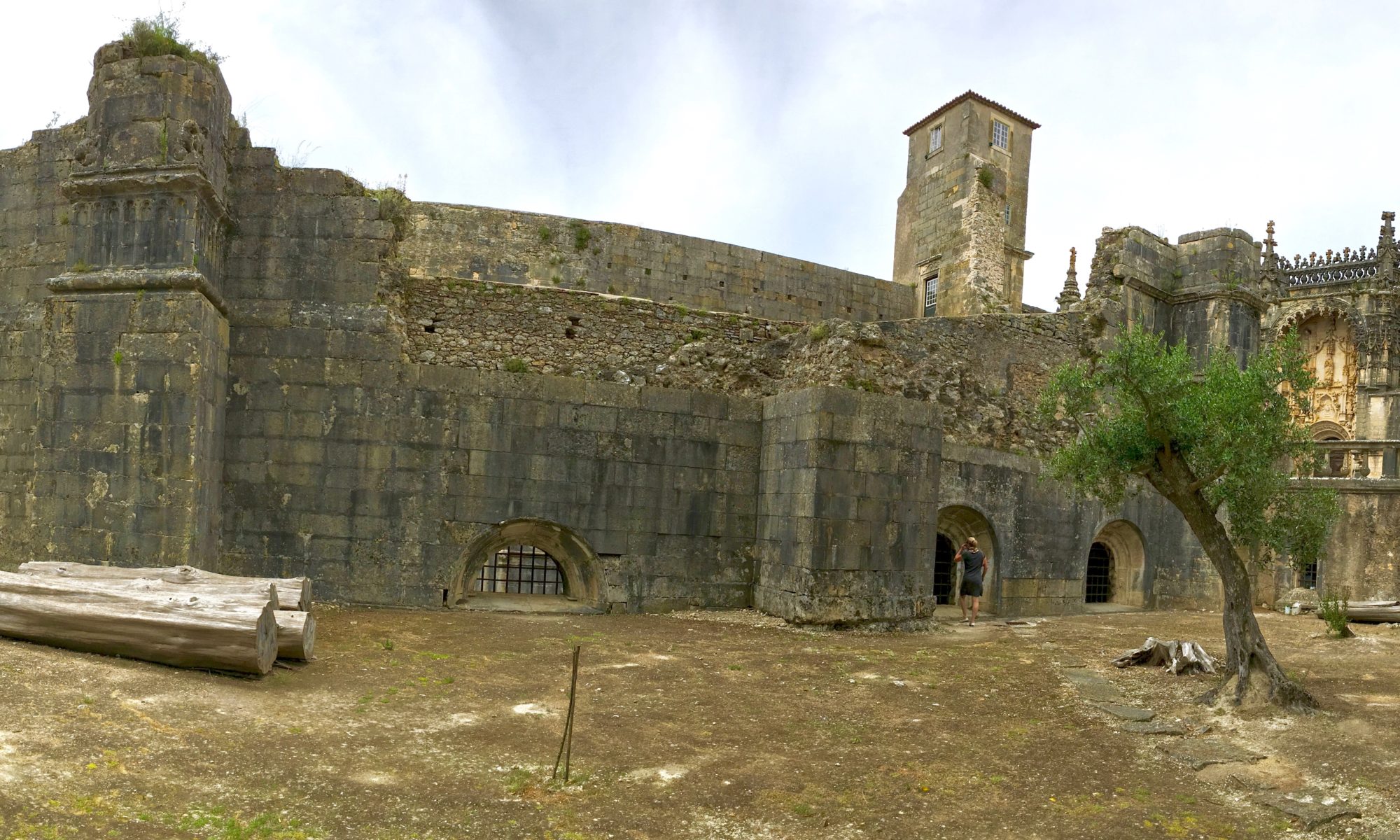 This was our lunch stop, a couple of hours out of Lisbon, (on the first day of our Central Portugal one-week trip), to the charming, small town of Tomar on the banks of the Rio Nabão. Its old quarter is typically attractive, laid out as a grid of cobbled streets centered on a fine square, and there are lovely riverside strolls to enjoy and green woods for picnicking. We enjoyed lunch at a small cafe in the heart of the old town, before exploring the convent on the hill behind the town, standing sentry, and the real reason for our visit.

The Convento do Cristo was founded (along with the town) in 1160 as the headquarters of the Order of the Knights Templar, scourge of the Moors and defenders of the faith. Castle and town both survived Moorish siege and attack in 1190, after which Tomar prospered in line with the gradual establishment of Portugal as a regional and, later, imperial force. It was one of the last Templar town to be commissioned for construction and is certainly one of Portugal’s historical jewels.

We spent more than two hours exploring the convent, amazed at what still remained of the opulence of the knights’ architecture and construction, before continuing on to our first night’s stay at the Bussaco Palace near Luso.

A little about the Knights Templar thanks to a summary from Conrad Bauer’s book on the knights and Wikipedia:

The Knights Templar is full of mystique and mystery. They existed for less than 200 years in the Middle Ages but in that time, with a mandate from God, they became some of the most feared warriors in the region, controlled perhaps the world’s first real banking system, and waged war against anyone who tried to wrestle Christianity’s holiest grounds from the control of the Catholic Church. Within their short lifespan, they quickly became one of the most powerful societies in Europe, if not the world.

They were officially endorsed by the Roman Catholic Church around 1129, and became a favored charity throughout Christendom, growing rapidly in membership and power. In their distinctive white mantles with a red cross, they were recognized as the most skilled fighting units of the Crusades.

In pre-Reformation Europe, the Catholic Church held a monopoly over religion. All Christian doctrine and its interpretation flowed through the corridors of Vatican City. While only a small district within the once-powerful city of Rome, the Vatican’s power was on a similar level to that of France, Britain, and the other major countries. At the time, however, the Church had no standing army. If they were to launch a Crusade – a military campaign – then they would need soldiers. From this need would arise the Knights Templar. With the beginning of the Crusades, they were created by the Catholic Church to protect pilgrims who were traveling to the Holy Lands.

For doing this they were allowed many extra rights. They were allowed move freely between countries and were not to be subjected to any taxation (on Papal orders), which allowed their wealth to rise exponentially. Within two decades of their founding, without the modern communications networks enjoyed by modern businesses, the order had properties and chapters throughout Europe, including stations in France, Scotland, Spain, Portugal, and England, as well as their bases in the Holy Land.

They could be considered the first multinational corporation in the history of the world. Armed with a papal endorsement and a freedom from taxation, the Templars found themselves ideally positioned to become a bank. Instead of just protecting those traveling to the Holy Lands, now their aim was now to protect the wealth of these pilgrims. They issued a form of credit, setting up the system which would evolve into what we know today as a modern bank. Any pilgrim visiting a Templar institution in his home country could deposit money or valuables and be issued a letter noting what they owned.This letter could be presented at any other Templar holding and would allow the pilgrim to withdraw money from the amount they had deposited. Without the need to carry around their wealth, the pilgrims were less of a target for bandits and attackers.

The Templars’ existence was tied closely to the Crusades, but when the Holy Land was lost support for the Order faded. Rumors about the Templars’ secret initiation ceremony created distrust and King Philip IV of France, deeply in debt to the Order, took advantage of the situation. In 1307, many of the Order’s members in France were arrested, tortured into giving false confessions, and then burned at the stake. Under pressure from King Philip (who was determined to take them down to rid himself of his debts to them and take whatever properties and wealth they may have), Pope Clement V disbanded the Order in 1312, but King Denis granted them stay in Portugal, where they helped the Portuguese protect themselves against the Moors coming up from the south. They changed changed their name to the Order of Christ and continued about their business, primarily in the region of Tomar.