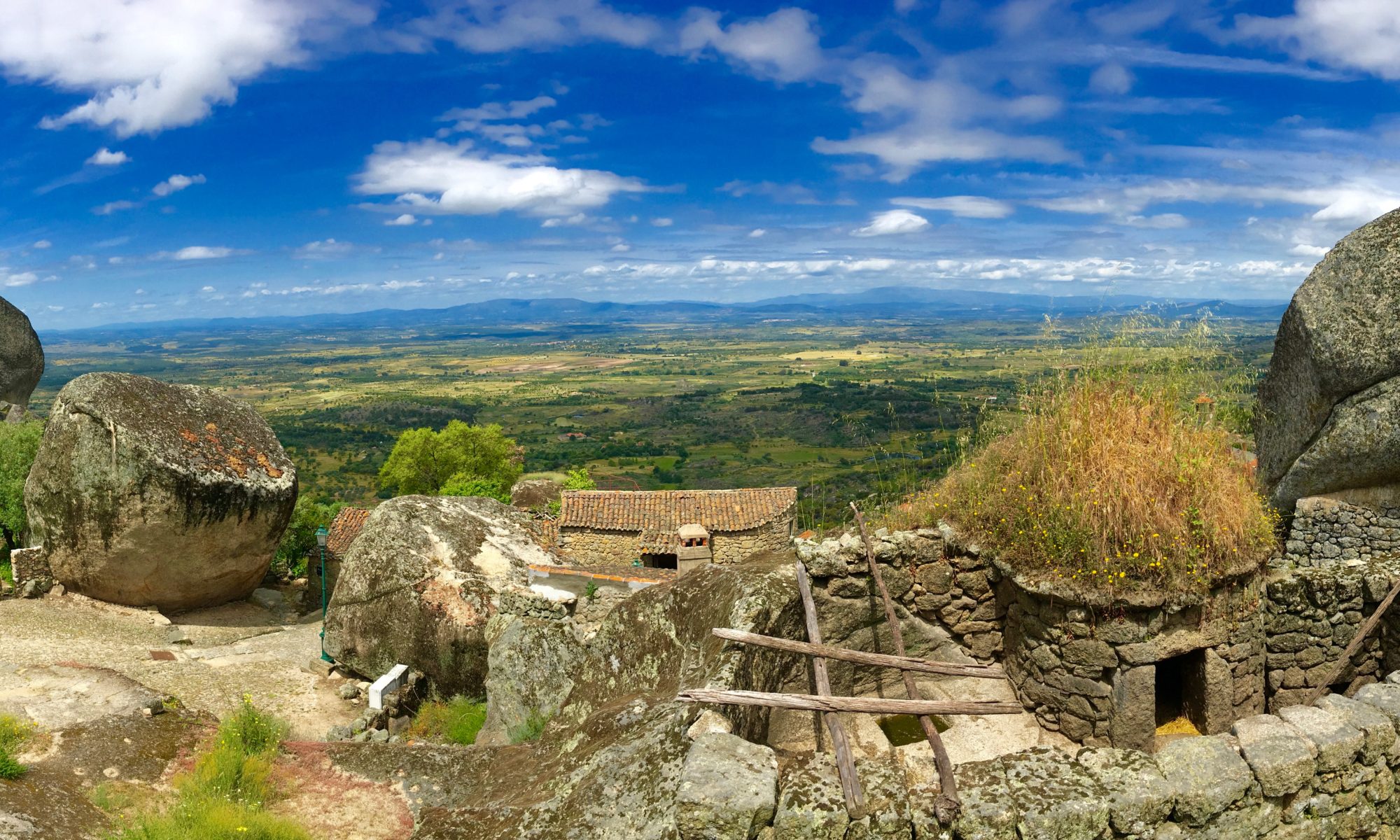 Once off the Serra da Estrala mountain range we followed a valley and the River Zezere northward to the town of Belmonte and the Convento del Belmonte. This is a beautifully restored convent just outside of town that overlooks the valley below, which is lined with fruit orchards, primarily peaches and cherries. Beautifully restored, the convent is modernly attired with plenty of common-sitting areas throughout the property. The rooms are quite large and modern with kind-size beds available. The primary building was made from large, hand-cut granite rocks with large wooden beam ceilings.

Part II of our Central Portugal Trip. Part I here.

We were greeted with a bottle of champagne in our room! Tired after that long hike, we shower and bathed and then cracked open the bottle. We followed up with a very nice dinner in the hotel’s restaurant. Flo had wild boar and I had the partridge stew with a bottle of local wine – all very nice.

The next day, after a wonderful brunch/breakfast, we explored the town of Belmonte, which is quite delightful and doesn’t take too long to walk. Lots of stone houses, built in a style similar to the convent, surrounding charming town squares. It is perhaps best known as the birthplace of Pedro Alvarez Cabral, who was born in the castle that overlooks the town, and who “discovered” of Brazil. We then continued our journey, heading southeast to another hilltop town, the very unique Monsanto.

Our phone Internet service stopped working for some reason along the way and it was our primary means of navigating. So we stopped at a garage and got instructions (in Portuguese) from the owner, who wrote down the villages we were to go through and where to go from there. We followed his instructions and just over an hour later we were in Monsanto. We could see it from miles away as it sits on top of a mountains that juts out of the ground primarily by itself.

There must’ve been a massive eruption in the earth’s core a long time ago that burst through, like a volcano, and through up boulders of all sizes, that then fell back randomly around and on top of this now newly created mountain. And then a few million years later man came along and though the mountain would make a good place for a castle fortress, and that many of the large boulders around its circumference, that homes could be built under and between them. These boulders became walls, foundations, and in a few situations, complete roofs as they built underneath large boulders. The result is Monsanto.

It is a bit of a drive to get up the mountain, and then a little more time to climb up to where the fortress is, or once was. We had a very clear day so we had amazing views, looking back into Portugal or into neighboring Spain. The fortress was used to keep the moors from coming up from the south and the east during the 11th – 14th centuries.

A fun town to walk and explore with nearly everything made out of rock. There are a few restaurants, cafes and shops to take in in the village. On top by the ruins of the church there are even dugout graves, etched out of the rock by early settlers, as there was no dirt to dig into. It’s just all rock.

We spent about three hours walking the streets and exploring the castle ruins, and then hit the road again, this time more south towards Marvao.