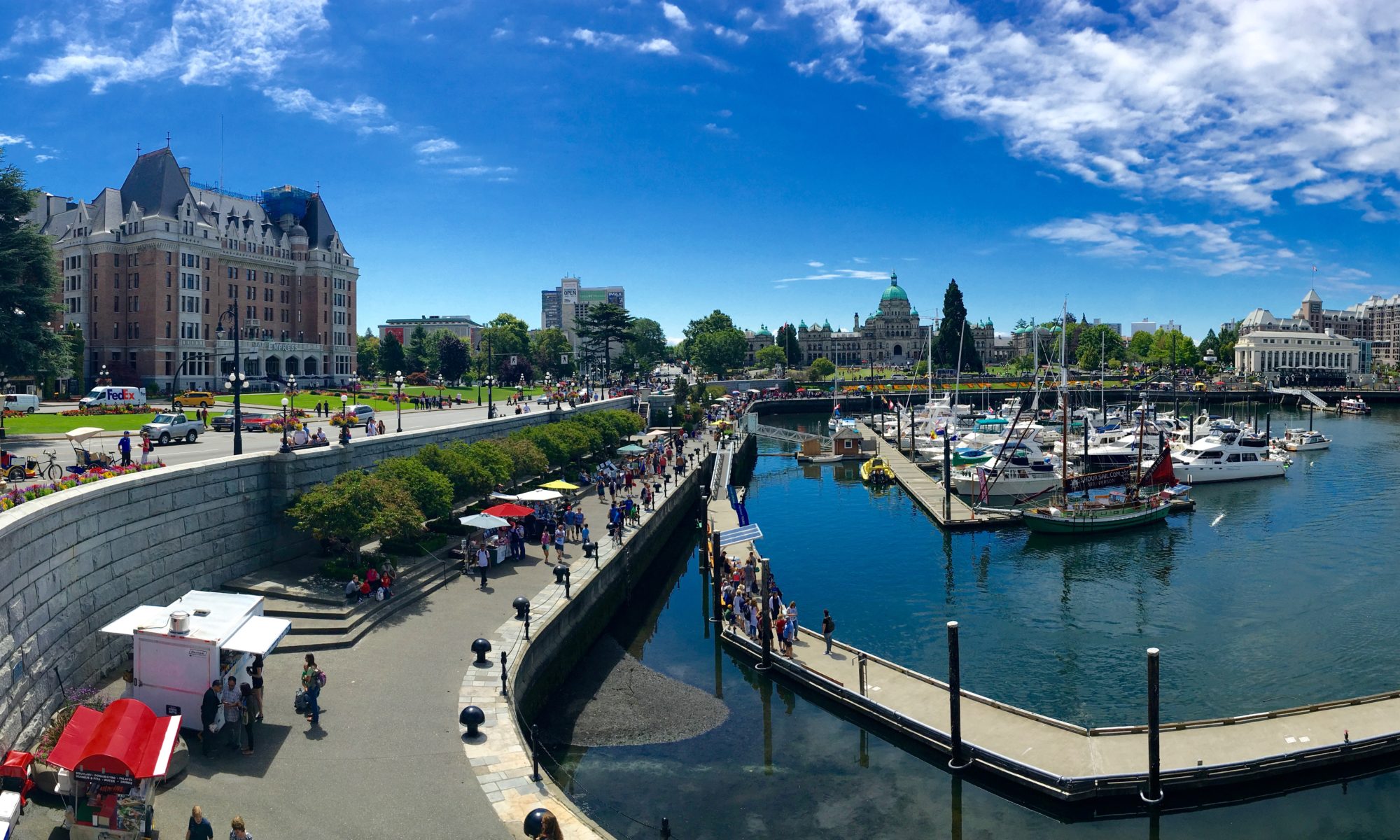 July was spent in British Columbia, touring the province to meet up with family and friends. I began in Vancouver, (by myself, Flo stayed in France), where most of my family now lives, and for good reason, it’s an amazing place. Decent weather, great people, incredible geography and easy access to all parts of the province. Downtown Vancouver is situated on a peninsula, although it is almost an island in many respects. In the foreground in the photo below is narrow inlet called False Creek, while the very dark green part in the background is Stanley Park. You can bike, skate, run or walk the whole circumference of the city along the shoreline and rarely have to cross a street.

While in Vancouver we went out to Atkinson Point, near Horseshoe Bay (ferry access to Vancouver Island) and on the highway towards Squamish and Whistler. Great park with a lot of old growth and a spectacular coastline.

I spent three weeks in the central part of BC called the Okanagan, playing golf, paddle boarding on Kalamalka Lake, and entertaining friends and family with good wine and some wonderful dinners. Forgot to take pictures though, having too much fun…

After the Okanagan I drove back to Vancouver and then over to Vancouver Island to first visit Victoria. A very beautiful city with some of the best weather in Canada. Not too big, very clean, and friendly people.

There was a car rally taking place during my time in Victoria and I happened to get this great shot of a classic roadster, a horse carriage and a bike, all lined up waiting for a light in front of the provincial building.

There are a lot of well-preserved classic buildings in Victoria that offer shopping, restaurant and bar/lounge experiences. It is a great city to walk and doesn’t take long to do it.

Next stop involved a drive north to Tofino. On the way I stopped at a favorite place, the Cathedral Grove just before Port Alberni. Massive old growths of Fir and Cedar, with a lovely walk through it, that is a must. Pictures don’t do it justice; how do you take a picture of a fir tree that is taller than the tower of Pisa? The oldest tree in the park is over 800 years old, 76 meters high and 9 meters around. It was over 300 years old when Christopher Columbus arrived in America.

My last stop before heading back to Vancouver (and my plane) was to Tofino, to once again meet up with family. It is located on the rugged west coast of Vancouver Island, and as you can see from the photo below, the place is simply amazing. Incredibly beautiful, and if you can fly in on a nice day by seaplane, you can really experience that. The beaches in the foreground offer great surfing, which has become the main activity and revenue generator for Tofino in recent years.

Below is downtown Tofino, located at the very end of a peninsula shown above, and the gateway to the northwestern coast of Vancouver Island.

We did another walk through old growth on Meers island, which is just a short boat ride away from Tofino. The tree below is, unbelievably, 1,800 years old. It is no longer growing, but now becoming the host to future generations of trees.

Had to include this favorite photo by Jeremy Koreski that gives you an idea of what it is like to surf in Tofino. Look closely and you can see a surfer exiting the barrel wave in the foreground. And what a backdrop!

Early August took me back to Vancouver and then over to Europe for the rest of the summer and fall. Next trip, back to Portugal to explore the Algarve. I’ll remember to take pictures this time…