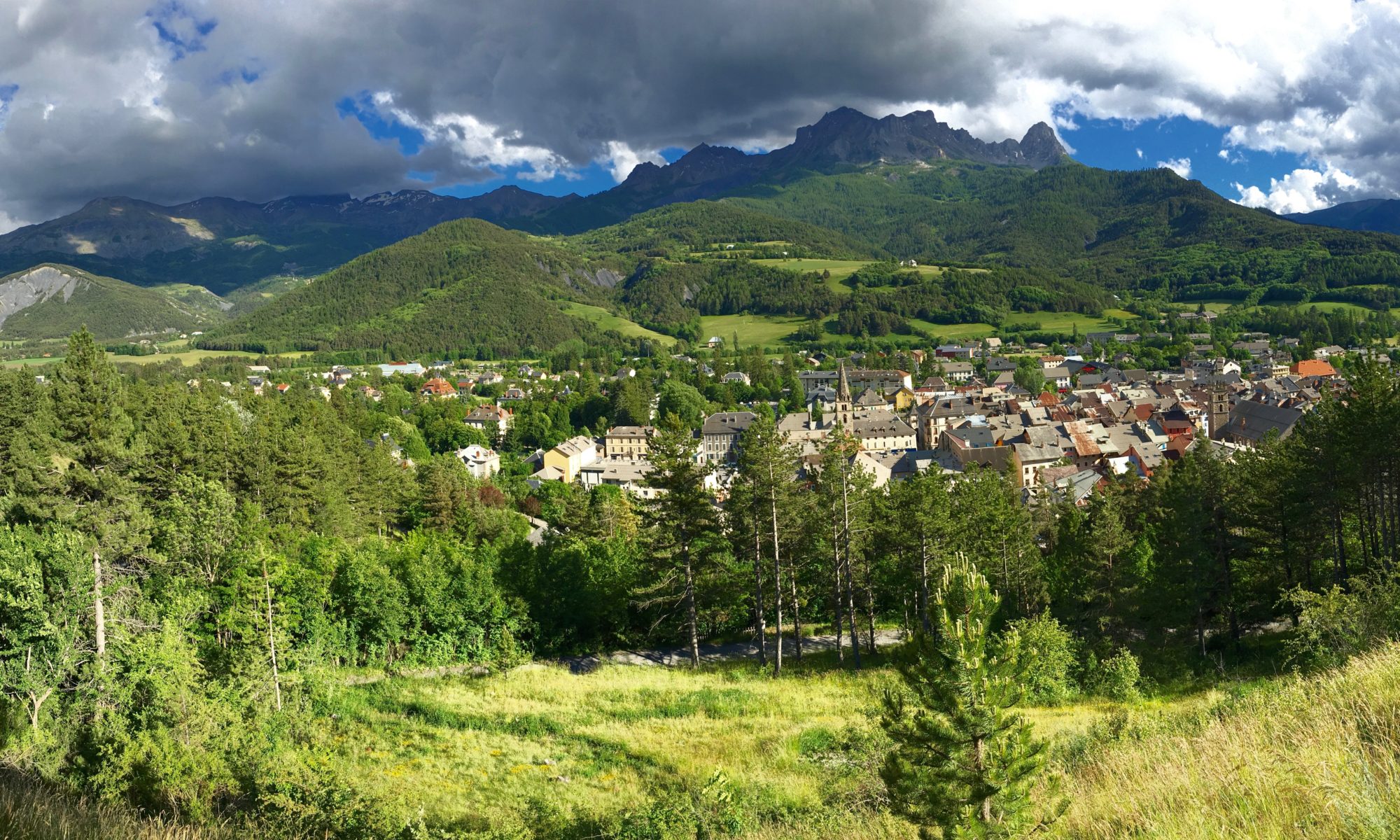 In mid’ June we decided to drive north to the small town of Barcelonette, situated high in the French Alps, about a three-hour drive from Nice. Our decision was based primarily on the strong relationship this town, or region, has had with Mexico since the early 19th century. Many people from here immigrated to Mexico; there’s not a family that did not have someone who went, and those that did, many did extremely well, returning years later very affluent and building elaborate mansions on the outskirts of town.

They certainly went at the right time. As well-experienced wool merchants, they brought with them their entrepreneurial spirit, along with the ideas and concepts that were taking place in France at the time, and applied them in Mexico. They started a number of businesses, many that still exist today, such as textile factories, the first brewery (Montezuma-Sol),  some of the first banks, and built the first department stores, such as Liverpool, Fabricas de Francia and Palacio de Hierro, copying the Parisian models of the Bon Marché and la Samaritan.

To get to Barcelonette we had to pass over a couple of mountain ranges, and at times the road was nothing more than a path, with often barely enough room to pass any other vehicles we met along the way. But most of the vehicles were touring motorcycles, which these roads are certainly best for, and made passing quite easy. The route we chose wasn’t the main road to Barcelonette, but whatever way you go it isn’t easy getting into the valley, especially in the winter months. The two roads we utilized in and out are often shut down when the snow starts, leaving only the highway via Digne for access.

We stopped for lunch in Colmar-des-Alpes, a small walled town with a chateau perched above it, all quite picturesque. Not very large though, within a 1/2 hour we had taken in most of the town and we were ready to continue our drive. The views along the way continued to get more amazing. And we certainly chose a good time to visit as there wasn’t much traffic and the weather was wonderful. We reached the summit and then began our descent down into the Ubaye Valley. We could see the town below, but it took us about a 20 minutes to reach it as we continued to zig-zag our way down the side of the mountain.

The valley is stunning. It is made up of high plateaus and mountains, fields of lavender and ski runs, a lovely combination of the Alps and Provence that gives it an exceptionally varied landscape. We have spent a lot of time in Whistler in Canada and find the Ubaye Valley very similar in geography and beauty. The valley begins in the town of Jausier to the east and follows the Ubaye River through the valley, through Barcelonette, before emptying into Lake Serre Poncon at the far end of the valley – about 50 km. in length. And the whole route is amazing with the gradual slopes of the mountains on each side reaching upwards to rocky, rugged peaks topped with snow even late into the year.

We have read many times that the region gets 300 days of sunshine a year, which sounds a little too good to be true – is there really that little precipitation? What about when it snows, which it really must do a lot of, for the amount of skiing there seems to be here? Well, at least for the three days we had in the valley, all were sunny with occasional scattered clouds.

We arrived late in the afternoon, after a very windy drive, especially for the last one third of the trip. Our apartment was right in the middle of the town, quite close to everything. We unpacked and then went out to explore the town, which doesn’t take too long. It is a quaint and cute with a number of large plazas lined with restaurants, connected by narrow roads, most utilized for pedestrian traffic only.

We had drinks in the main plaza, watched a couple of games of Euro 2016, and then went for dinner at El Bocaccino a few steps away. We had pizza and it was very good, as was the house wine. When finished we walked back to the plaza and watched Italy beat Belgium. The restaurant was so good we decided to go back the next time, but unfortunately it was closed on Tuesdays. Later we saw it is rated #1 on TripAdvisor – it deserves it.

The next day we travelled west to the lake of Serre Poncon, which is the highest elevated lake in France. It is a beautiful turquoise color surrounded by high mountains and lush green fields and forest. Our plan was to do a hike to the top of a ridge that overlooked the lake. We took highway D900 west and just as we arrived at the lake we turned right onto D594. We followed this smaller road along the shoreline for a bit, then turned right again onto D7 and began climbing up the mountainside. It zigzagged back and forth and we climbed, eventually it turned into a gravel road. We finally pulled over where there was a sign saying there was a path to a cabin (du Jas). We didn’t take it, deciding to just continue walking up the gravel road. It eventually took us to a ridge of the mountain, but we couldn’t see much through the trees.

We found another trail that seemed to be heading back to where our car was, and following it we eventually came to an opening that provided panoramic views of the lake and area. And we also found the cabin! We continued to follow the path and ended up returning right to where our car was. A great hike with amazing views. And what a day we had as you could see forever. We definitely want to return here and explore the lake more, especially by paddle board.

In the museum we went to there are write-ups about many of the Barcelonettes (as they are called) who went to Mexico, and one was Henri Tron who opened and operated the Palacio de Hierro, a department store that still exists in Mexico City today. Enrique Tron is a good friend of ours in Puerto Vallarta and this would have been his great great grandfather.

Many Barcelonettes returned rich and built large mansions that are found on estate lots on the outsides of the town. Beautiful homes, some still owned by Mexicans. They have a Mexican celebration here every August here, with Mariachis and everything Mexican.

We returned to Nice on a different route, climbing up to Col de la Bonette, a mountain peak, traversing it and then descending and descending all the way down back to Nice. This road (D64) is France’s highest elevation highway and is loved especially by motorcyclists for its windy roads, but also by bikers who are serious enough to challenge themselves to this climb. On the way back we stopped in the town of St. Martin Vesubie, another lovely hillside town (a creek runs through the middle of the town’s primary sidewalk/pathway), which is a celebrated entry into the Mercantour Park for many activities such as hiking, biking, and skiing.

2 Replies to “Journey to Barcelonette”