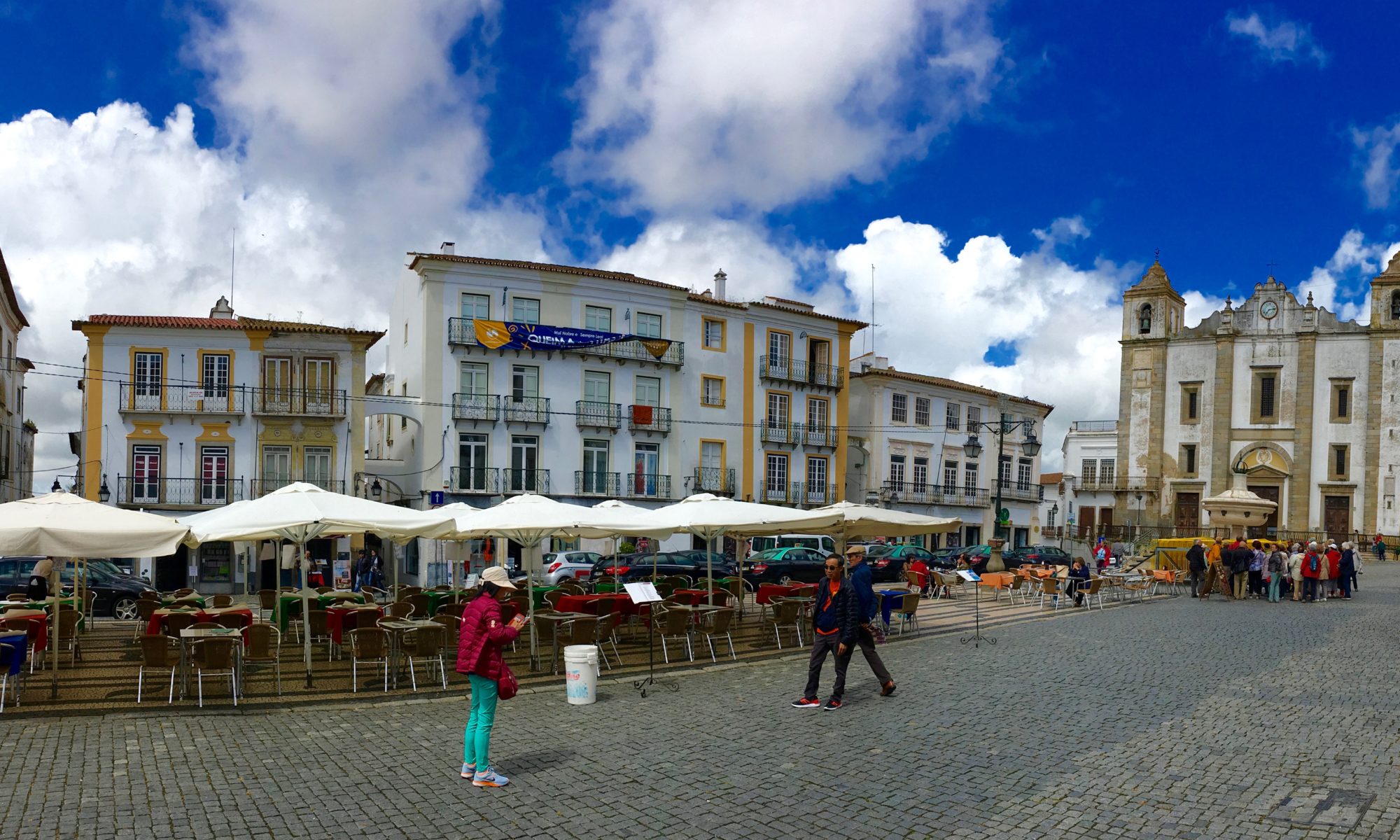 Evora is a town which was once encircled by fortress walls, although little of it is visible now. In its place is a road, a “periferico”, around the town. It is not large, quite easily walkable throughout, through a maze of streets that can make it difficult to know exactly where you are at times. But small enough to quickly become easy to find your way around and back to the hotel.

We stayed at another Pousada, this once called the “Convento Evora”. It is also a historical monument, as most of the group are, located right in the center of town next to the Temple of Diana, supposedly one of the best-preserved Roman temples remaining on the European mainland. And the church of São João Evangelista, beside the hotel, is a must-see for it’s simple, adorned wooden walls and talavera tile work, and the museum adjacent which provides information about the history of the palace, church and monastery.

Evora is home to St Francis Church and its famous Chapel of Bones, where the remains of more than 5,000 of Évora’s past inhabitants are cemented to the walls of this large, eerie sixteenth-century tomb, created by a group of Franciscan monks. Yes, they used the bones to construct the chapel, and the empty eye sockets are all looking down upon on you.

We had dinner at Cafe Alenteja and it was quite good. The wine was excellent, “Cartuxa,” a local Evora wine. We decided to just have appetizers consisting of baked asparagus, house-made potato chips, regional pork sausage, and local cheeses. Very tasty and recommend it. Casual cafe-style, arrive early as it is popular.

We had a wonderful dinner the following night at Fialho, a family-run restaurant in operation for the past 70 years. Good thing we made reservations as it was quickly full after our arrival. And the food was amazing, I’d have to say the best we’ve had yet in Portugal. Flo had the lamb and I had pork tenderloin. Just wonderful, with a good Alentejo wine and a 20-year old Taylor Tawny port to finish off the night.

And that was the last night of our travels through central Portugal. The next morning we headed back to Lisbon, just 1 1/2 hours away. A wonderful trip that we look forward to doing again, with friends, in the near future.

Here’s what Rough Guides have to say about Evora:

ÉVORA is one of Portugal’s most historic and unspoilt cities: indeed its Roman temple, Moorish alleys, circuit of medieval walls, ensemble of sixteenth-century mansions and ochre-trimmed, whitewashed houses have resulted in it being awarded UNESCO World Heritage status. A vibrant university helps support a modern town that spreads beyond the old walls, though its current population of around 55,000 inhabitants is fewer than in medieval times, and its compact centre is easily explored within a day or two. Évora’s agricultural roots are recalled on the second Tuesday of each month, with a huge open-air market held in the Rossio, south of the city walls, while the big annual event, the Feira de São João, takes over the city during the last ten days of June, with handicraft, gastronomic and musical festivals.

Praça do Giraldo is the city’s central hub, with the main historic kernel just to the east. Within the surrounding city walls are several distinct old-town areas, with another concentration of sights in the streets between the main square and the public gardens. Meanwhile, to the north of the centre you can follow the course of the medieval Aqueduto do Água Prata (Silver Water Aqueduct), into whose ever-rising arches a row of houses has been incorporated. Wherever you wander, nothing is more than a ten-minute walk from Praça do Giraldo.

One Reply to “Evora (Days 5-6 of Central Portugal Tour)”